Our efforts to stop discrimination against conservatives has seen three quick wins this past week.

As we reported in an earlier eblast this week, we had delivered a letter to the University of California at Irvine in Orange County demanding the University justify its refusal to grant the College Republicans chapter permission to rent out a large venue to the group for events featuring Milo Yiannopolous and Dennis Prager.  We also demanded that the University explain why it would not allow the events to take place in the evening and were insisting they be scheduled during the day when students are still in classes and the general public is at the office. (Read the Orange County Register’s article here)

Last year, Freedom X similarly intervened on behalf of the College Republicans chapter at Cal State Fullerton to resolve security issues for a Yiannopolous event. Our help made all the difference for the college group. But the same problem crops up every year, and so Freedom X President/Chief Counsel Bill Becker sought a meeting with UCI campus administrators to discuss the College Republicans’ concerns and to foreclose a potential lawsuit alleging First Amendment free speech and Fourteenth Amendment equal protection violations against the school.

We are pleased to report that the meeting went extremely well and that UCI has backed off its demands. It has even offered the College Republicans use of its largest venue, the Bren Events Center, at a reduced cost and will allow them to be evening events. We wish to thank Lt. Anthony Frisbee and Sgt. Bob LeSage of the UCI Police Department for making these concessions possible. 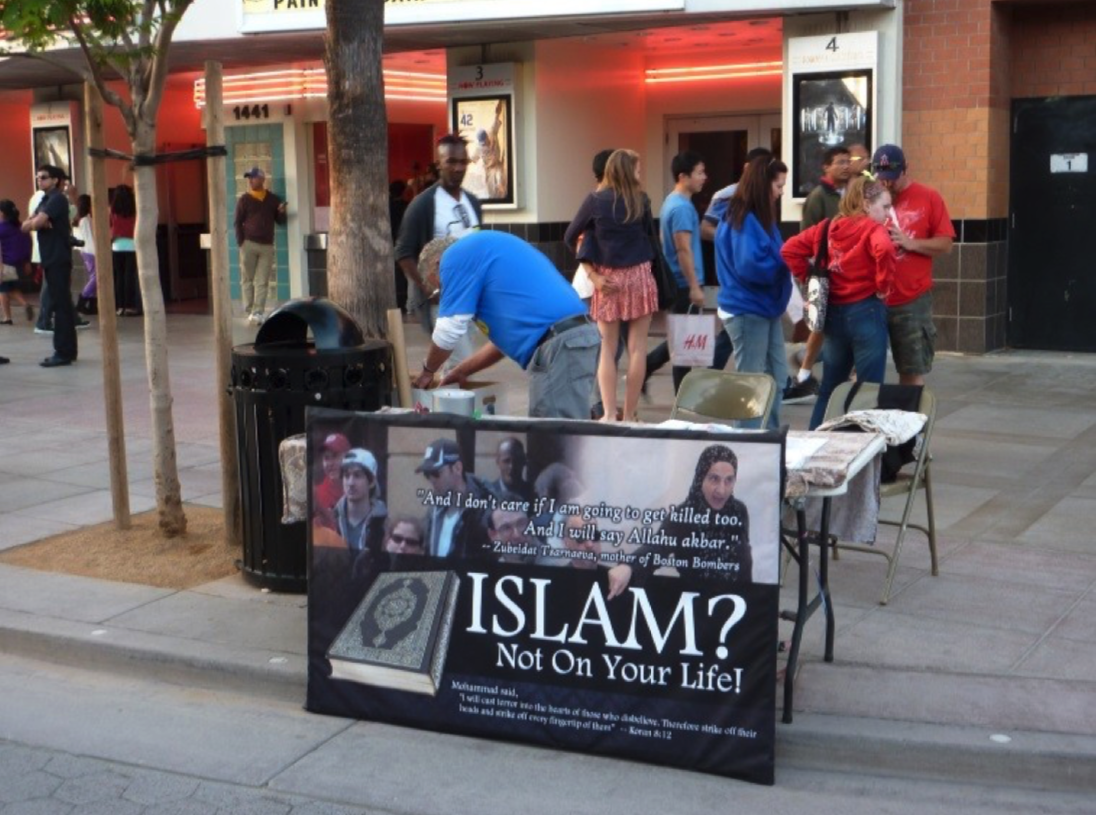 In a 1980 decision, the U.S. Supreme Court ruled that under the California Constitution, individuals may peacefully exercise their right to free speech in parts of private shopping centers regularly held open to the public, subject to reasonable regulations adopted by the shopping centers.

Our client, Counter Jihad Coalition, occasionally applies for space in California malls for the purpose of distributing its free brochuresdetailing the facts about Islam. Not surprisingly, the large population of Muslims residing in Southern California take exception to the group’s mall presence. Indeed, CJC has frequently been confronted by angry Muslims who threaten its members’ safety with threats of violence.

For more than a year, Cerritos Mall management has approved CJC’s applications to set up a table in various mall locations. Due to concerns over the hostile behavior of Muslims visiting the mall in reaction to CJC’s presence, mall management has occasionally tried to restrict the group’s ability to interact with patrons. And each time, Freedom X has responded by threatening legal action against the mall for violating CJC’s First Amendment and Fourteenth Amendment rights.

CJC’s director, Steve Amundson, has taken to wearing a GoPro camera for the purpose of recording instances in which he is threatened with physical harm by angry Muslims. Recently, mall security cited privacy reasons for prohibiting Steve from wearing the camera and threatened to escort him and his volunteers off mall property if he wore it again.

Sigh. Once again Freedom X was called upon to protect CJC’s rights, demanding he be allowed to wear the GoPro. In an e-mail to mall security, Bill Becker wrote:

I have instructed Mr. Amundson that he is permitted by law to wear and use his Go Pro camera. Be advised that any attempt to deprive Mr. Amundson of his rights, such as escorting him off the property without probable cause, may result in legal action. Your attorneys are free to contact me should you plan to enforce mall policy under the guidelines as you interpret them.

Steve reports that he wore his GoPro without incident last Saturday. Rather than punishing him for exercising his rights and rewarding those who threaten his safety, mall security made the correct decision to protect him by providing a large police presence to deter any potential violence. 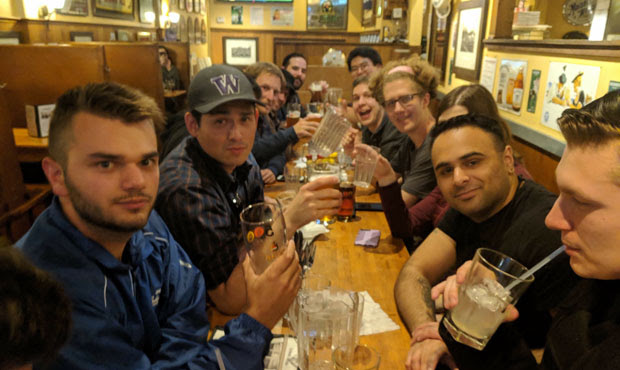 On Friday, we received a call from Chevy Swanson, the president of the College Republicans of the University of Washington in Seattle. Earlier this year, you recall, we settled a lawsuit in their favor when the University tried to charge the student group an outrageous sum of money to provide extra security at their event featuring Joey Gibson/Patriot Prayer.

Chevy said his group wanted to reserve a table at Shultzy’s Bar & Pub near campus to celebrate “Beers 4 Brett” following Justice Brett Kavanaugh’s Senate confirmation . But Shultzy’s posted on its Facebook page that the College Republicans were not welcome and that they would be refused service.

Seattle has one of the broadest public accommodation ordinances in the country. It prohibits busness establishements from denying service on the basis of, among other things, a person’s “political ideology.”

We immediately responded to their post by letting them know we would sue them for violating the anti-discrimination law unless the College Republicans were welcomed, and I instructed Chevy to take his camera and go to the pub.

That’s all it took for the restaurant to see the light and back off of their threat to the College Republicans’ rights and now Shultzy’s is under the glare of the media.
Read about it in the Seattle Times, Newsweek
and World Net Daily

The managers of a Seattle bar who sought to ban a GOP organization from celebrating the confirmation of Supreme Court Justice Brett Kavanaugh – at one point telling members to go away – have backed down quickly after they were told their discrimination was illegal.The case developed quickly – and collapsed just as fast – thanks to social media.

It was a Facebook post from the College Republicans at the University of Washington, Saturday, shortly after Kavanaugh’s 50-48 confirmation vote in the U.S. Senate, that announced a “Beers 4 Brett” event hosted by the college Republicans Saturday night at “Shultzy’s Bar & Grill.”

“Shultzy’s,” quickly responded with “Shultzy’s is a sports-themed bar & grill that welcomes everyone. We do not promote or endorse any one religious or political viewpoint. As such, due to the political nature of your planned event, we request that you find another venue to celebrate.”

That was followed quickly by a message from Freedom X, which has represented the college Republicans in other rights fights.

“Bill Becker Freedom X clients UW College Republicans have been told that Shultzy’s B&G intends to discriminate against them on the basis of political   ideology and deny them service in violation of Seattle Ordinance Chs. 14.06.020(T) and 14.06.030(B)(2-3) tonight 10/6/18. On advice of counsel, they will exercise their statutory right to patronize this establishment. If denied service Freedom X will sue to vindicate our clients’ right.”

According to Jason Rantz at KTTH Radio, the bar told the GOP to go elsewhere after “some Progressive activists contacted the bar to complain.”

Chevy Swanson, president of the college group, told Rantz, “I thought that the left wing activists who took notice of our event had lied to the restaurant about the nature of our event. It seemed incredibly odd to deny service for a quiet gathering of college Republicans and guests.”

Reported Rantz, “The bar’s discomfort with the event aside, there could have been a small problem if they were to enforce their request: Seattle prohibits discrimination on the basis of political ideology, one of the few cities in the country offering such protection. Indeed, it’s been controversial, as some Progressives argue it should be legal to discriminate against people who hold views counter to their own.”

Rantz described how Swanson talked with Bill Becker of Freedom X, and then called the bar to explain “they can’t deny service over political leanings.”

“We did and they hung up on us … ” Swanson explained.

Ultimately, Swanson and more than a dozen College Republicans went to the bar as planned.

“We asked for a table and they served us,” Swanson told Rantz, who reported, “For Swanson and the UWCR members, this is par for the course of being a conservative in Seattle, but they vow to push back against the ideological bigotry.”

The bar also came under criticism on social media, with Darlene Callahan noting, “Just to remind all conservatives, U.S. Patriots and grandparents, that if the Democrats take back the House, they plan to impeach President Trump … bring back the regulations President Trump removed … undo all that this administration has done including jobs & taxes … destroy all evidence of crimes committeed during the Obama regime so that none will exist to indict anyone” and more.

Becker pointed out on the comment thread that the “mere presence of supporters of a newly confirmed SCOTUS justice does not pose a safety threat.”

“The left is delusional and hysterical. You don’t have a right to discriminate because you can’t control your emotions,” he said.